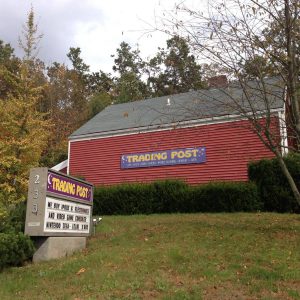 At the time, books were a very popular form of entertainment and there were no Big Box and internet Bullies to keep us independent bookstores down. Soon we added LP records & tapes and found a niche that needed to be filled with band t-shirts especially Grateful Dead. We took on CDs when they came out and then by the 90’s had evolved into a full service music store, book store, Dead Head shop and Rock N Roll store with posters, tapestries, incense, clothing, jewelry and a great relationship with the Farmington Valley (and beyond) community.

In 2000 we moved into a larger space and we began selling and renting DVDs but unfortunatley the LPs had to go to make room. The books had to be scaled way back as well because mass merchandisers everywhere began bookselling

and soon there was just not enough book business to go around. May all those indepenent bookstores we used to know and love rest in peace. Luckily we were already diversified enough to adapt to new markets and the coming of the internet. Cassettes too took a back seat and although not prominently displayed, we still have a good selection of new and used ones.

That same year of 2000 we opened a second store “Eastern Accents” next door and filled it with wood and stone carvings, folk & primitive art, furniture, clothing and jewelry that I had been collecting from Thailand, Nepal and Bali, Indonesia. In August of 2006 we bought a three unit building in the Pine Meadow section of New Hartford and moved Eastern Accents there where it stands today. Then eventually the LPs made

their way back into Trading Post as there has become a renewed interest in that funky old media again.

In early 2008 we began negotiations to buy the nearby George Fillmore Goldsmith building and in April ’09 we moved in.
We have gradually increased our online sales business over the years and plan to continue in that direction but still remain committed to our brick and mortar roots. That’s why when you call us (800-530-5124) you reach a live, friendly person who will listen and help.
Coming on thirty four years in business is an exciting milestone and we’re delighted to have so many of our long time friends and extended Trading Post Family still with us